From September 2017 until April 2019, the CNRS (Laboratories SAGE (Strasbourg), CESDIP (Saint Quentin en Yvelines)) and the European Prison Litigation Network coordinated a research project on the protection of fundamental rights and access to legal aid for remand prisoners in the European Union, together with partner universities and NGOs from nine European countries

Legal aid systems, the tools giving access to the law and the measures adopted to allow for the intervention of lawyers in prison greatly differ depending on the country. Such differences largely account for the great disparities observed with regards to access to a judge and the effectiveness of rights. As a matter of fact, it appears that access to legal resources in detention and the external intermediaries for prisoners’ complaints are critical factors in the judicial protection in detention. In addition, the attention devoted to this dimension is greatly insufficient at the European level, whether EU law or ECHR law is concerned.

Building on these observations, ten partners from European countries (CNRS (Laboratories SAGE and CESDIP), European Prison Litigation Network, University of Utrecht, Helsinki Foundation for Human Rights, University of Applied Sciences and Arts of Dortmund, University of Florence, Bulgarian Helsinki Committee, University of Ghent, General Council of the Spanish Bar, University of Comillas) have mapped laws and practices in the EU as regard to legal aid for remand prisoners (on issues relating to conditions of detention and aspects which have an impact on criminal proceedings: security, transfers, geographic distance…) in nine countries of the EU (Czech Republic, Belgium, Bulgaria, France, Germany, Italy, Netherlands, Poland, Spain). The project has also analysed the conditions for the inclusion in European law of procedural obligations regarding legal aid for remand prisoners.

Based on the research the project partners published in 2019 a White Paper on access to justice for pre-trial detainees.

You may also find all national reports in the sidebar of this page. 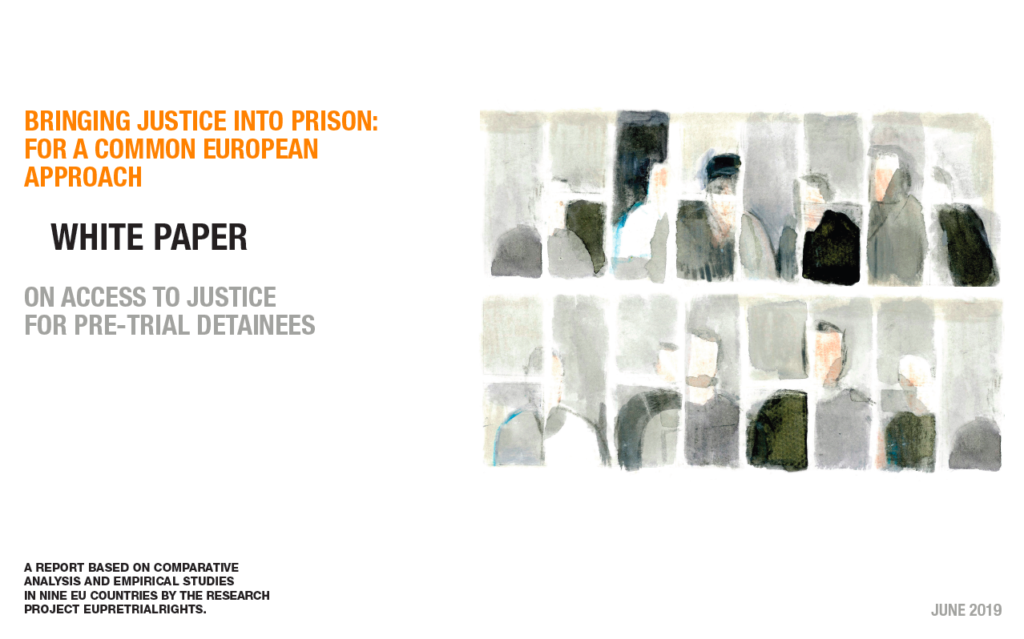 The content of this page and all publications of the project represent the views of its authors only and is their sole responsibility. The European Commission does not accept any responsibility for use that may be made of the information it contains

We use cookies on our website to give you the most relevant experience by remembering your preferences and repeat visits. By clicking “Accept All”, you consent to the use of ALL the cookies. However, you may visit "Cookie Settings" to provide a controlled consent.
Cookie SettingsAccept All
Manage consent