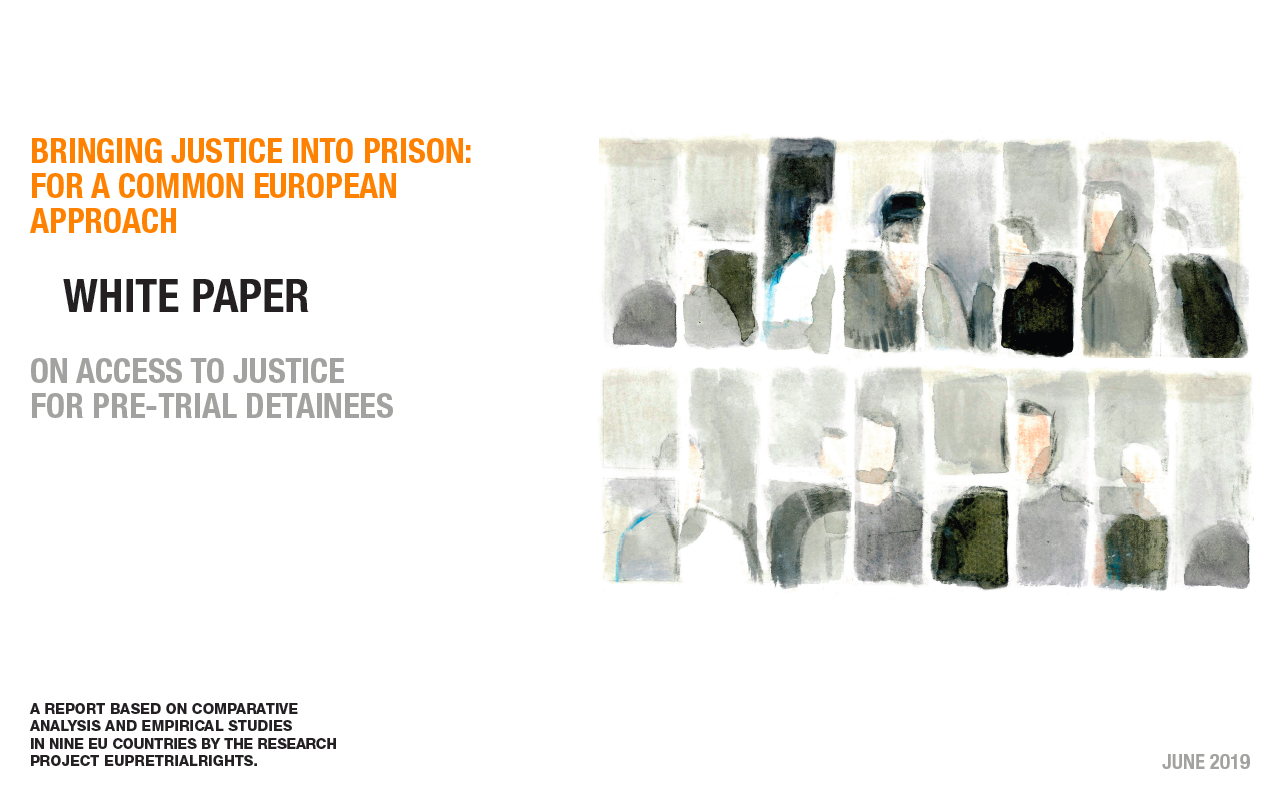 WHITE PAPER on access to justice for pre-trial detainees

Based on comparative analysis and empirical studies led in nine EU countries, the European Prison Litigation Network, in partnership with CNRS (Laboratories SAGE and CESDIP), University of Utrecht, Helsinki Foundation for Human Rights, University of Applied Sciences and Arts of Dortmund, University of Florence, Bulgarian Helsinki Committee, University of Ghent, General Council of the Spanish Bar, University of Comillas published a White Paper on access to justice for pre-trial detainees.

Under the influence of the case law of the European Court of Human Rights, the recognition of the fundamental rights of detained persons has progressed considerably over the last twenty years. However, these efforts are undermined by the difficulties faced by detainees in bringing cases to court. To determine the reasons for this phenomenon, this research has brought forward an in-depth assessment of national situations regarding access to legal assistance for remand prisoners, and how these issues were addressed by European law.

This research has highlighted six series of key observations:

(1) It is well-established that prisoners have cumulative disabilities in access to justice. These include low economic, social, and cultural capital, which often goes hand in hand with great difficulties in reading and expressing oneself orally and in writing. In addition, initiating legal proceedings leads to confrontational situations and exposes prisoners to various forms of reprisals that discourage them from exercising their rights. This research shows that, in this matter, pre-trial detainees constitute a particularly vulnerable category. They are less inclined to take action to ensure respect for their fundamental rights for fear that their actions will have a negative influence on their criminal proceedings. They are often reluctant to call on their lawyers to resolve violations of their rights, for fear that such requests could lead to a reduction of the time spent by the lawyer preparing the criminal case, which is a priority for them.

(2) The particular vulnerability of this category of detainees is largely ignored procedurally by the European law, at the ECtHR and, even more at the EU level.

First, and rather paradoxically, while the effectiveness of the domestic remedies regarding prison conditions is a fundamental issue for the ECtHR, it fails to take into account factors that are essential to the effectiveness of these mechanisms. The ECtHR has developed a considerable body of case law to give effect to the substantive rights granted to detainees, particularly on matters of access to a judge. The Court, however, fails to take into account the essential role of the lawyer from the point of view of detainee’s access to justice, and more generally neglects the many material obstacles prisoners have to face. Its vision is to encourage the simplification of procedures to enable the detainee to act alone, rather than to favour the intervention of a lawyer to ensure the defence of his interests. The result is a general weakening of the legal protection of detainees.

The EU, on its side, has initiated action in reference to another production of the ECtHR: the court’s minimum standards for criminal proceedings. Considering the unequal respect of these standards among member states and the need for judicial cooperation, the EU adopted six directives setting its own minimum rules in criminal matters. However, these standards do not address issues concerning the fundamental rights of prisoners in prison. As of today, two mutual recognition instruments allow prisoners to be confronted with prison conditions in another EU Member State: the European Arrest Warrant (EAW) and the Framework Decision on the transfer of prisoners. Being increasingly used in the judicial cooperation between the Member States, it is clear that the execution of mutual recognition instruments could lead to violations of fundamental rights of pre-trial and convicted prisoners. This concern is particularly supported by recent jurisprudence of the Court of Justice of the European Union in the joined cases Aranyosi-Căldăraru (joined cases C-404/15 and C-659/15 PPU), in which execution of the EAW was refused due to poor detention conditions in the issuing Member State. Violations of fundamental rights within the various countries of the European Union are thus an impediment to judicial cooperation between the Member States. The lack of a common standard now appears to be a serious problem from the point of view of cooperation in criminal matters at the European level.

(3) Access to legal information is the first step towards the effectiveness of rights. A striking observation is the absence of a voluntary policy in this area, and often even an altogether absence of such a policy. Far from being conceived as a factor in restoring social and political ties, law is perceived with suspicion in prison: It is understood as a risk of disorder and disobedience, not as a necessary basis for authority. The report highlights three sets of problems. (i.) The administrations consider access to legal information only from the perspective of popularization, through brochures that briefly describe the principles of prison operations. While this approach is legitimate and necessary, it does not put detainees in a position to defend their rights and file complaints. Indeed, there is a limited range of legal texts that prisoners may access, and the case law, in particular that of the ECtHR, is almost systematically unavailable. (ii.) Effective access to the law is made impossible by the frequent proliferation of lower-level texts (circulars, memos), which are generally neither available to prisoners nor even to legal professionals, since they are often not published or are made accessible with huge delay. (iii.) The development of new public management is accompanied by the use of professional guidelines that are subject to continuous changes in order to adapt the work of prison staff. Based on a logic of flexibility, these new modes of writing prison law tend to free themselves from the ECtHR’s requirement of framing the administration’s discretionary power.

(4) There is a broad consensus among national policies on the recognition of the right of prisoners to obtain assistance from lawyers under national legal aid schemes for prison litigation. However, the lack of common standards allows the coexistence of very different systems and very different levels of protection within the European Union. In particular, countries that use the merit test linked to the envisaged proceedings do so according to very different parameters. Remuneration of lawyers under the legal aid scheme are highly variable. In any case, remuneration is almost always lower than the actual cost of the work provided, and that does not allow law firms to operate in a cost-effective manner. In addition, delays in the payment process are described everywhere as highly problematic. Despite these difficulties, where structured legal aid policies are pursued, they have the effect of amplifying the awareness of prison issues by generating positive dynamics: consolidation and autonomization of prison law, involvement of representative institutions of lawyers, emergence of new leading opinions, etc.

(5) This report also highlights the importance of non-state actors. Obviously, lawyers are crucial in the protection the rights of detainees: as this report points out, the intervention of lawyers in prison as early as the police custody phase has a major impact on the criminal trial. However, we have also stressed the limits of bars commitment to the defence of pre-trial detainees’ rights. While prison law has developed at both European and national levels in the past two decades, and while the exercise of the rights of defence has long been an emblematic theme for the profession, prison matters have rarely emerged as a specific issue for Bars. Such minor attention is all the more problematic as the economic situation of lawyers who engage in prison litigation is complex and usually precarious, notably due to the low level of legal aid remuneration in most countries. It is mostly through informal self-organization and altruistic political dedication that lawyers working in this specialty can achieve common work and information sharing. Such an organization, however, does not solve all the different material, ethical and economic difficulties lawyer encounter.

(6) If the focus is not on individual defence but on the role played as a collective actor, it is certainly NGOs, and to a lesser extent law clinics, that are at the forefront. To some degree, their intervention compensates a lack of political concern and legal protection in this area. However, there is a lack of acknowledgement of their major role, whether financially, practically or procedurally. (i.) Legal support for prisoners requires a significant investment, in terms of organization and fundraising. However, little funding is available for this type of activity. In particular, States are reluctant to finance litigation against them and, as a general rule, European Union funding instruments exclude this type of activity. (ii.) The implementation of rights protection activities in prisons places NGOs in a situation of total dependence on the administration. Organisations are dependent on administrative authorisations to access the prison and may be subject to retaliatory measures. (iii.) The role played by NGOs in the protection of Convention rights, at the individual level, but above all from a structural or systemic perspective, is not recognized at the processual level. Among the national laws studied, NGOs rarely have a locus standi allowing them to act as applicants. Despite the fact that detainees are a particularly vulnerable category and that intangible rights are most often at stake, NGOs do not benefit from a favourable procedural regime as found in the field of environmental law or protection against discrimination. 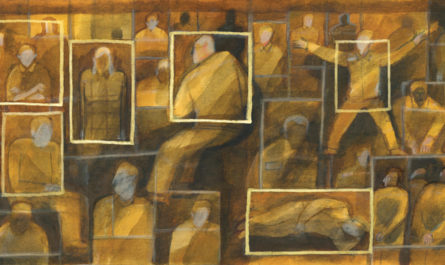 International conference on access to rights and to court of prisoners, ECtHR, 6-7 December 2018 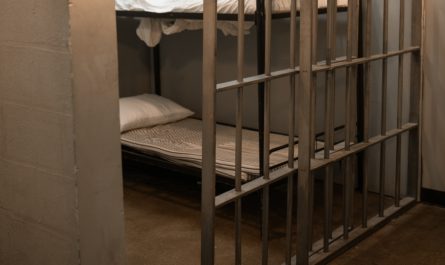